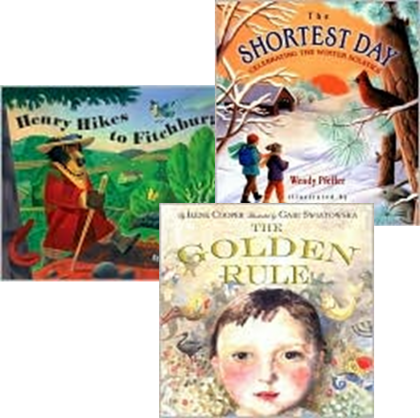 Based on the best picture books for teaching young children about the love, reason, tolerance and good works that make up our faith, this class teaches our younger UUs the art of self-expression, to value individuality, to think for themselves, and to understand that everything is connected.

A whimsical story for exploring self-expression and individuality.

Think for yourself and live simply, as does Henry, the bear, based on Henry David Thoreau/

A Hippo and a Turtle make friends in this true story.

To Everything There Is a Season

The classic verse from Ecclesiastes with each phrase illustrated in a different cultural tradition.

Three soldiers convince the town to make soup.  Sometimes it takes reminding to be generous.

Henry the bear walks while his friend makes money for the train.

Fanny in the Kitchen

Unitarian mother of the measuring cup uses her reason to invent recipes with precise measurements.

Grandad’s Prayers of the Earth

On the Night You Were Born

The seed of creation is in all of us.

Woodcarvings evoke this traditional song, written by a Unitarian abolitionist and reformer.

A woodcarving barber gives a young Jewish boy an angel.

This Is the Stable

Future Unitarian astronomer loves to look at the stars.

In jail, Henry the bear goes on a fantasy climb and meets another bear.

A family keeps a quilt made of clothes from the old country.

What is the name for God?

The legend of the saint.

Born With a Bang

The universe personified tells the story from science.

All I See Is Part of Me

The oneness of all creation.

The universal appeal to loving kindness.

Celebrating the greening of the earth and the spring equinox.

From Lava to Life

The story from science of the creation of the earth.

A turtle teaches respect of the earth and living in peace.

Three children work out a way to solve some problems and make connections despite differences in race, religion and heritgage.

Pondering how to make the world a better place.

Finding the holy in relationships and helping each other.

A mother takes care of her son.