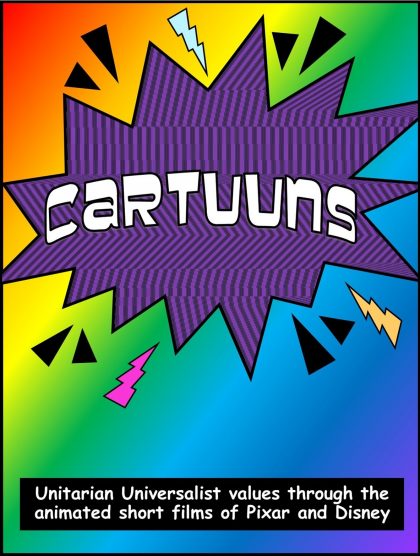 Unitarian Universalist values through the animated short films of Pixar and Disney.  Available as an online class on zoom, or as a homeschool class.  Award-winning short films, great discussion and a wide variety of activities combine to make this a fun class for kids!  Children must be registered to participate. Supply bags are delivered monthly.

The unseen creature inside a lost-and-found box discovers a bully stealing toys from other children and teaches him a lesson.

A young boy accompanies his father and grandfather to work for the first time, and discovers their unusual job of harvesting the stars from the moon. Though both want the boy to do things their way, he forges his own path to success.

Your Friend the Rat

Rats were once regarded as sacred and as animals that would bring one luck.  Are they getting a bad rap today? Remy and Emile from Ratatouille plead the rat’s case for peaceful co-existence between people and rats.

A wind-up toy wants to play with a baby, until he realizes how destructive babies can be. But when the baby falls and cries, the toy rallies to cheer the baby.

Sanjay finds inspiration to bridge the cultural and generational gap between his American and Indian heritage.

Kari recounts her experiences babysitting for Jack-Jack (The Incredibles), a most unusual baby.

Mater and the Ghostlight

Mater (Cars) is a prankster who is about to get pranked.

An old man named Geri sits in a park and plays a game of chess against himself.

A hungry rabbit teaches a forgetful magician a lesson about responsibility.

Olaf, from Frozen, teams up with Sven on a merry mission to discover the best holiday traditions, learning about Christmas, Hanukkah, and the solstice in the process.

The witch from Brave tells the legend of a prince whose greed destroyed the kingdom and his own future.

Peck tries to learn how to balance his safety with his friendship with Gus.

Just when Dug, the talking dog from Up, thinks his birthday will never be happy, he gets the best present of his life.

A baby bird must overcome its fears to survive, and does so with a little help from a friend, who teaches it that sometimes you just need to go with the flow.

Empty-nest syndrome and letting go of our children is hard for many parents.

Fate plays a part in the meeting of a young office worker and a woman.

Daydreams and dreams are explored in this story of Red the unicycle.

BURN-E is a robot on the same ship as WALL-E, whose work gets numerous interruptions, thanks to WALL-E and EVE.

Mom and Dad’s Emotions (from Inside Out) find themselves forced to deal with the possibility that Riley is going on her first date.

Day and Night are frightened and suspicious of each other at first, but soon come to realize that each has unique qualities with different perspectives on the same world.

An abandoned and always hungry puppy encounters a kind man who decides to take him home.

A Jackalope teaches an embarrassed sheep to be unashamed and to leap proudly.

Snooty birds get an embarrassing lesson in accepting those that are different.

Interviews with the animals at the Marine Life Institute about their experiences with Dory, the forgetful fish from Finding Dory.

Amidst a sea of black umbrellas, one red and one blue umbrella stand out and set the stage for a love story.

Inspired by the beauty of tropical islands and ocean volcanoes, Lava tells the story of a lonely volcano, Uku, who longs for his true love.

An inspiring and musical showdown between two street performers.

Forky, from Toy Story 4, asks his friends the truly important questions of life.